Once in a while my husband (technically fiance but I'll call him anything I darn well want!)
(Sometimes 'boyfriend' too for fun) but anyway... my husband took the kids up to his parents place for the day and I had the house all to myself. What to do? What to do? Well, I knew before he even finished making the offer what my day would be filled with.

DIY DIY DIY!
Nothing crazy, no sewing machine stuff, but a few different projects that I just haven't had time for. The DIY's that usually happen around here involve my 3 year old son. And then he destroys them within an hour of making them. Not always intentionally. But mostly out of curiosity of how strong the glue is... I think.

First things first.
Brunch.
It'd last me for the afternoon so that I could plow through til dinner. 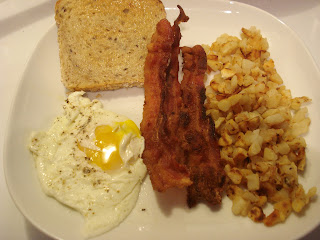 
This is an easy DIY. You don't need a tutorial but my finding the right oval shape will amuse you. Because, I don't free hand anything. But really, what in our house is oval? I quickly scavenged around. And this is what I found. Quite seriously.

So in the end the computer mouse won as a template.

Inspired by Pinterest and a pin I found from the blog entry DIY: Recycled Tshirt Scarf Necklace Roundup at etté studios, I wanted to make use of some tired t-shirts. And since I found 3 t-shirts quite quickly I decided I needed to try three different styles.


And meet my model. Have you met her before? She's a bit of a hussy. I apologize for that. But she hates bras, she's a bit 70's like that. But she's better looking than me on a DIY Sunday, that's for sure! 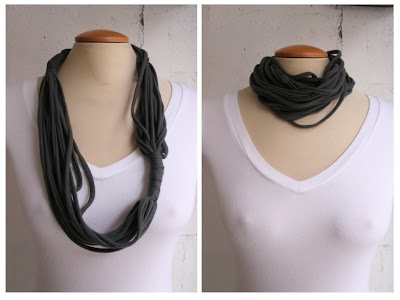 Design Two
I also found this next one via etté studios.
Full tutorial found here: Recycled Tee Scarf at Schwin&Schwin 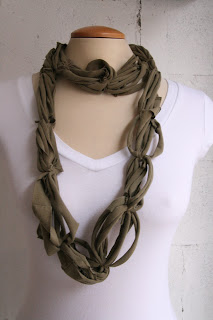 Design Three
Scarfy/necklace thing on Crafster by Skaborsk
The original tutorial that she followed on Instructables was apparently ordered to be taken down. By who? I don't know. As she says, how can you patten a cut up tshirt? I have my money on... well, lets just say it rhymes with Banthropology. They like to patten indie ideas as their own.
Did I go too far?

Moving on. As the tutorial says, cut your strips, stretch them, cut the seams (if there are any) then knot all of the lengths together into one very large loop! I wanted to take a photo of it laid out because it was comical but meh, so little time.

Again. Pinterest. Oh I have a few gems pinned. I just need more time! But bit by bit I will get through them. And in case you care to see what I've pinned go HERE.

I first found this pin at Juicy Bits and was so inspired to do them for my kids' bedroom.

But after reading some comments on the tutorial I wondered if yarn dipped in glue would, in fact, work.

So I looked around some more and who other than Martha Stewart herself (or her creative team) had also written a tutorial on it. Hers said to wrap the balloon first and then brush glue over the yarn.

I tried one of each. To see which worked best. And the results... are not yet in. They're drying silly!

But what I will tell you is that I realize now that I already made a mistake. But what's new.
I didn't water down the glue. Could explain why I went through an entire bottle with the two of them!
DOH!
Oh well. I'll report back later on how they came out.
I will say this. IT IS MESSY. Be prepared to get gluey. Very very gluey. I don't suggest this as an activity for children under... hmmm... 18 years of age. Seriously. I might have thrown the balloon across the room except that it was stuck to my fingers.


So that's my DIY Sunday. Maybe I'll get a couple more in over the month of March. My mat leave is over as of April 16th so I need to make the most of it!

And now tell me, what did you do this weekend?